Roxson Joseph, a 33-year-old restaurant chef, was involved in a terrible rollover accident on Jan. 6, 2022, when his brakes failed to work going down a hill. He was ejected from the pickup truck and lay in a field for about two hours. Several of his family members were in the truck, and tragically, his daughter didn’t make it.

When Roxson arrived on March 6, he needed maximum assistance with bed mobility, standing up and all his self-care tasks. He was unable to put weight on his right leg for six weeks and needed a mechanical lift to get in and out of bed. He had nerve damage in his left hand that affected his ability to grasp and release, and he was thus unable to wheel himself in a wheelchair.

Physical and occupational therapists got working with Roxson to help him regain his independence. They led him in exercises with dumbbells, weights and bands to increase his strength and trained him in transfers (such as from a bed to a wheelchair). They used extensive manual therapy and stretching with his left knee to improve his range of motion and seated exercise machines such as the SCIFIT® and OmniCycle® for endurance and strength. 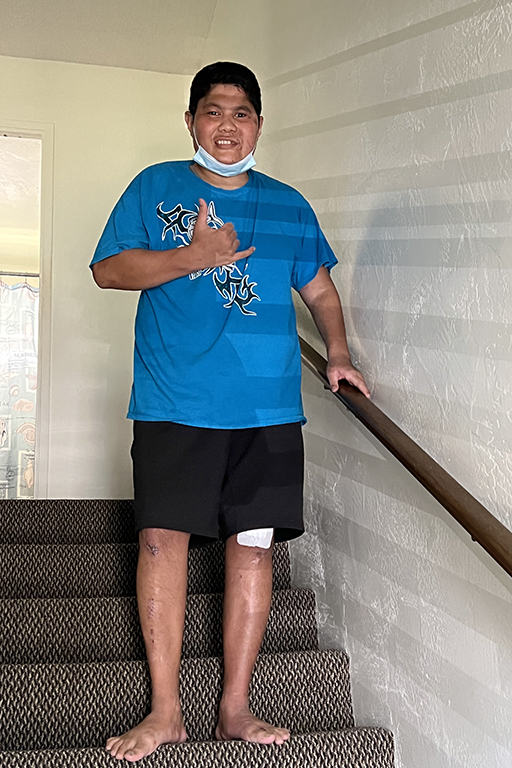 “Roxson was incredibly motivated and worked very hard every day in therapy,” said Ashley McKellar, director of rehab and occupational therapist. “He never wanted the session to end and would ask, ‘That’s it?’ after an hour-long session. Roxson is grieving the loss of his daughter and used his faith and the support of his wife to push through every day. He quickly became comfortable with all the therapists and enjoyed joking around with us. He used humor to help push through the pain when we would work on his shoulder range of motion. Roxson felt like he didn’t work hard enough unless he was sweating. We saw improvements every single day with Roxson because of how hard he worked.”

His physical therapist, Morgan Sparber, added, “Roxson never allowed this accident to define his mobility despite having four limbs involved. He embraced the journey he was on and aggressively worked toward his goals, finding joy in the most unexpected places. Multiple times during course of care, therapists had to progress the goals as Roxson continued to press forward. He used nearly every piece of equipment in the gym on his way to achieving independence and a return home to his family.”

Roxson returned home on April 22, independent in his self-care and walking independently with a quad cane for distances around the community. He is able to go up and down a full flight of stairs on his own as well.

“Wow, these guys are seriously amazingly awesome!” said Roxson. “At first, I was so scared, but I pushed through, and now I can take care of myself again. Through the pain there is always laughter. These guys are amazing, and that is why I am doing outpatient therapy with them. I love working with them. Let’s go, therapy! I love therapy!”

One of his outpatient goals is to be able to return to work.