On Dec. 21, 2019, Hazel Plummer, a 111-year-old resident at Life Care Center of Nashoba Valley in Littleton, Massachusetts, became the oldest living resident in the state.

The facility celebrated Hazel’s achievement with a special party on Jan. 15, 2020, complete with a cake, musical entertainment and a special message sent by Governor Charlie Baker. The activity department also shared interesting trivia about the year she was born, including the fact that Teddy Roosevelt was president and women had not yet won the right to vote.

After the eighth grade, Hazel went to trade school to become a seamstress. She went to work for an upscale fashion designer who specialized in women’s clothes on Newbury Street in Boston. She married Elmer Plummer, a widower, in 1934. He was working in a drugstore near her home at the time.

Hazel’s father became aware of the attraction, and before she could go out with him, her father paid him a visit at the store to inquire about his intentions. When Elmer came to the house to visit her, it was clear that when it became 10 p.m., her father would come to the top of the stairs and wind his alarm clock; this was the signal it was time for him to leave.

The Plummers had two children, the first born in 1936. After the birth of her children, Hazel made women’s clothes, including wedding and bridesmaid dresses, from her home. She was an active churchgoer her entire life who never drank alcohol or smoked. At Christmas, she would bake large plates of cookies, and her husband in his Santa Claus suit would bring them to the neighbors.

Now, Hazel has six grandchildren, and she has four great-grandchildren living in Australia.

Prior to moving in to Life Care Center of Nashoba Valley, she lived in her own second-floor apartment.

When asked to what she attributes her long life, Hazel replied, “eating ginger.” 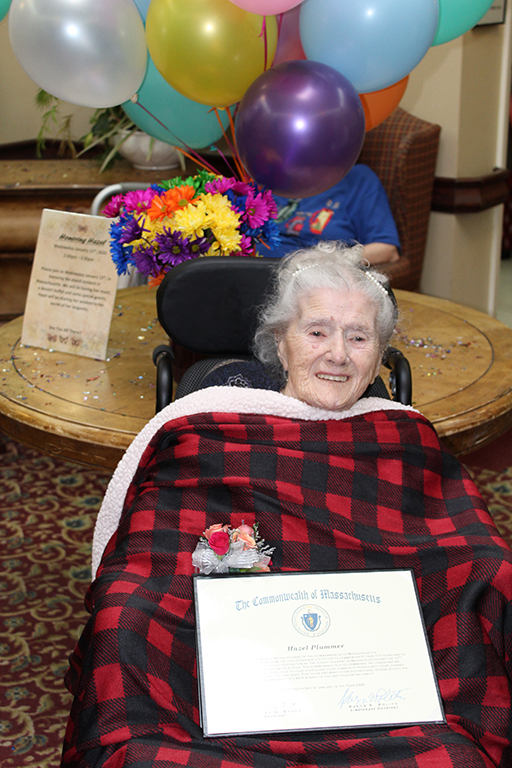 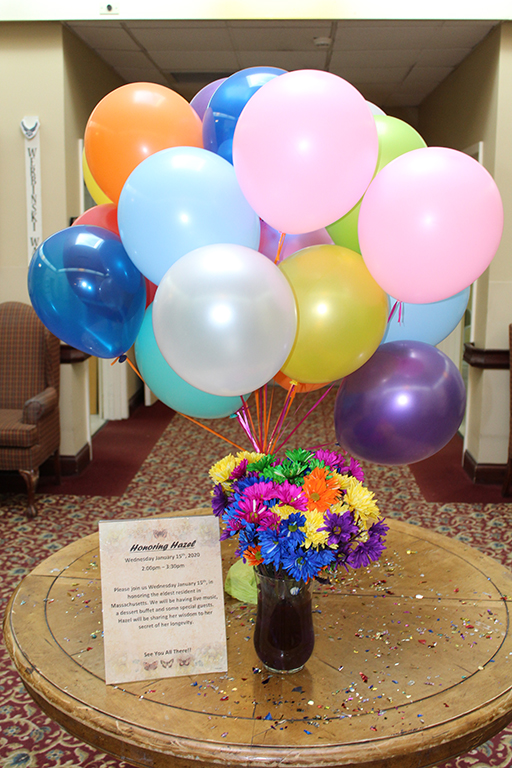